skip to main | skip to sidebar

CLAY SHIRKEY: How cognitive surplus will change the world

UFMVN3WPSUQQ
Posted by Speldrong The Merciless at Tuesday, July 06, 2010 No comments:

Lifted from Mashable, here is a short interview with Ben Huh the CEO of The Cheezburger Network
featuring some of his thoughts on how internet culture redefines how we consume culture and democratise content.

UFMVN3WPSUQQ
Posted by Speldrong The Merciless at Wednesday, May 12, 2010 No comments:

As you'll be aware I am a fan of the internet, music, popular culture and so on. I'm going to display in quite a subjective manner the power of new media in terms of access to high art by using Youtube to link the popular late 1990's Playstation game Parappa the Rappa to J.S. Bach via hip-hop and Kraut Rock. Admittedly first of all one must be curious and seek out the source of audio samples but the game is simple enough, like the Bacon Factor but for art or music.

Is based on the Busdriver track Avantcore >>>>>

Which samples Kraut rock Doyens Can >>>>>>

And so we finish with the Amsterdam Baroque Orchestra's rendition of J.S.Bach's Bwv1067 Orchestral Suite - 07 - Badinerie

Posted by Speldrong The Merciless at Monday, August 03, 2009 No comments:

Berlin TV tower - lift off from Fabian Tischer on Vimeo.

Direction: Fabian Tischer
Posted by Speldrong The Merciless at Saturday, August 01, 2009 No comments: 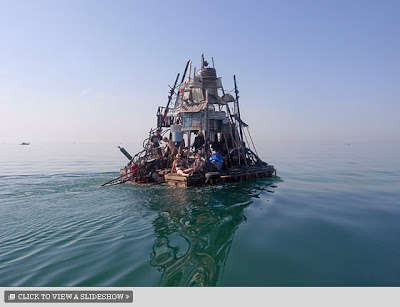 Swoon and a motley crew of collaborators didn't need an invitation to show at the Venice Biennale they just went and did it. They built rafts from reclaimed detritus sailed the Adriatic and invaded the Worlds most prestigious Biennale (with a little help from Jeffrey Deitch)

I dreamed of doing this sort of thing myself but from across the land, I may yet still obtain the $150'000 budget Swoon raised to realise this project. The whole venture is a Utopian tale of collaboration, from raising the funding to negotiating the waterways a 30 strong team of determined individuals achieved something quite remarkable.

Amid glasses of whisky sours and nips of the amber nectar the convivial introduction to this years Edinburgh International Festival theme was set. The event, organised by The Skinny (click on title link) featured a panel consisting of Johnathon Mills, Fiona Bradley and Jackie Wylie whose articulate and passionate descriptions of their respective programmes facilitated illuminating insights into the critical machinations of their projects. It was also a valuable opportunity to understand something of their personalities and as such the subjective elements of flavour and nuances one can illicit from their curation - dare I say it, their taste. So, no dry polemics here.

It is fair to say the Johnathon Mills set the agenda, as director of EIF he is responsible for the curatorial theme. In the year of Scottish Homecoming he has made a valuable contribution to the branding of Scotland PLC by directing the worlds attention away from the Tartan, Whisky and Shortbread and towards the rich academic and cultural heritage the nation enjoys. One could argue that how could the festival be steered toward any other bearing given the context it’s nestled in, the compass in this instance shows true North. Mills academic rigour and verve for research were evident in his contextualisation of his programme in which he set his curation against the backdrop of the genisus of The Enlightenment, The Festival and the parallels that can be drawn with those events as moments in social and political history with the situation we currently find ourselves in. Indeed, the very act of holding such an event, this public discussion, was apt to the theme as Mills pointed out the Enlightenment was about Ideas and the open discussion of them. From a geeks point of view it might have been useful to mention the Frankfurt Schools theory of Enlightenment which informed much of Post WWII British cultural policy. In the birth of the Edinburgh Festival we have the Provost of the time Lord Faulkner state “The Edinburgh International Festival is an attempt for a Festival to embrace the world.” The idea of turning toward the bosom of enlightenment and leaving the “endarkenment” as Mills puts it rings truer than ever. It seems that we should embrace the festival and the arts as a wider context more tightly than ever. It could be said we are in the midst of a perfect storm, Scottish Cultural policy is in flux with funding structures about to be changed dramatically, economic recession is snapping at the heals of cultural organisations (In the USA private/public partnership funding for cultural institutes has been decimated seeing the loss hundreds of galleries, jobs and perhaps yet thousands worldwide) and added to this there is a current of apprehension at the immanent arrival of a Conservative Government at Westminster. So when Fiona Bradley introduced Cultural Capital into the discussion the idea of what we have and what we value and what has been built up and invested into our reservoir of enlightenment, a key issue in the function of the festival was raised.

We can agree that the Enlightenment for the most part owes it dissemination to the advent of the Guttenburg Press whose invention allowed mass publication of information for the first time, similarly we could say that with the advent of the internet and self publication, blogging and social media our access to knowledge has once again been freed from the hands of institutions who are served by controlling knowledge/information. In the same spirit access to the festival should be addressed but with the important addition of addressing intellectual access. We have so many means of disseminating information it might be assumed we have an embarrassment of riches - access to the arts could not be more open? I believe that we need to address how the information/knowledge we consume is approached and digested by the public. CultureScotland sets out high ideals in its notion of Cultural Entitlement but it fails to address the key issue in the entitlement to enlightenment - Education.

I do not believe it is the responsiblity of cultural intsitutions to join the dots for the public when it comes to viewing/consuming the arts. Illucidation is a key element of the work of any organisation in the “culture industry” but if we can return to the idea of Cultural capital for a moment you may see how important my next point is. Under the gathering clouds of economic turmoil in the culture industry or not, investing in the visual and philosophical vocabulary of this nations children is the key to filling up that reservoir of enlightenment and unlocking a genuine appreciation of the arts, of making cultural entitlements tangible. That is why I believe that the art and design curriculum should be scrutinised, augmented and then made a core component to at least Standard Grade level in schools. Over a generation this investment could raise cultural critical capital to levels we find across Europe - The thing is, there’s no point having tickets for the opera that cost £10 if it’s only middleclass pseudo intelectuals like me that get the benefit of it.

A good point was made to me - it’s a huge challenge to change the quality of access, it's as much about feeling comfortable in a social situation where the arts are concerned as being able to afford it and understand it. How do you hold yourself, what are the manners at the bar, should I drink from the bottle, what do I wear, when do I clap, when do I cheer, can I walk out, do these people mind sitting next to me?

The white elephant in the room for me was Relational Aesthetics. I was impressed with the passion Jackie Wylie had for her programme but I felt she needed to raise the issue of social engagement in artists practices more succinctly (I’ll write a specific blog about her programme as it is so fresh and fits with many of my own ideas). Fiona Bradley mentioned Rirkrit Tiravanijas work with the Modern Institute in Glasgow as an instance of a project for the people by the people with a significant contemporary cultural impact on the world art stage. By using a simple question “What is your favorite film” he was able to build a consensual forum of community activity and create temporary synergy through serving food and screening the four most popular choices at a cross roads in the neighbourhood. The films were incidentally, Casablanca, A Bug's Life, The Jungle Book and It's a Wonderful Life. Now perhaps the public weren’t aware of the critical nexus this particular brand of cultural interventionism was spawned from and it could be accused of being popularist rather than addressing the key issues which would genuinely facilitate a greater sense of community but this sort of activity where the public is directly addressed and asked to participate in the formation of the programme provides an interesting dilemma for institutions such as the Edinburgh International Festival.

Access should not be about consensus in so far as the content is pitched down to fit the lowest common denominator but it could be informed via addressing where work is staged in some instances and what over-arching themes might be in others. The Festival this year has achieved one of these aims by taking work to Dundee, it could do much more with this. The Scottish Borders, the heart of which is only some 40 miles or less away would benefit greatly from greater access to the diverse programme the EIF offers. Johnathon Mills may yet be the man to open up for what has seemed a long time quite an austere institute. When he coins "Enviromental Poetics" as a theme in conversation it is clear his desire to address the quotidian in terms of transcendence is based in a noble pursuit - EIF can be for everyman.

In Germany the Enlightenment was known as the "Zeitalter der Aufklaerung" literally translated it means the age of clearing things up. With this exceptional opportunity to engage in the history of The Enlightenment and a new context in which to consider what Enlightenment may be, it is my hope that whilst we find ourselves and our institutions in flux that we grasp this opportunity to clear some things up.
Posted by Speldrong The Merciless at Thursday, July 30, 2009 No comments:

"Marjetica Potrc proposes sustainable architectural solutions and modes of living that counter deep ecological and economic crisis, the explosion of the mega-cities and the dissolution of modernist projects and utopias. Her Series of Captioned images provide would-be activists with globally valid lessons learned from local experience."

I was fascinated by the strategies Potrc laid out in her work. Her ideas really made me reassess urban living. I'm based in rural Southern Scotland and often find this a hindrance to developing my practice but as Potrc points out the kind of community I am part of and the intensity of impact that it has on the environment is relatively sympathetic. I have a small and close network of friends whom I interact frequently with (community I guess) and in many cases we deal rather in barter economics than buying and selling goods for cash. We trade services and share tasks. I'm sure these activities take place else where - I know from city living that they do.

I like how she links seemingly disparate communities from the Balkans and the Amazon and shows how community ventures can enrich lives whether it's sustainable farming or community building/adaption (see painting Modernist Tower Blocks in Tirana). She highlights the significance of the creation of personal space and it's important effect of psychological geography. 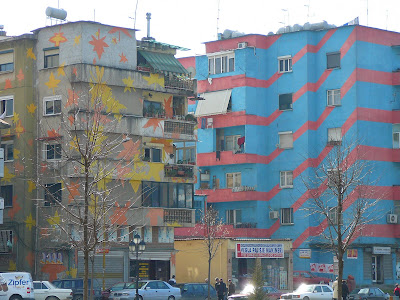 In a sense this idea of adapting to, customising or hacking your environment sets forth a manifesto for much of the art work I am interested in.
Posted by Speldrong The Merciless at Wednesday, July 29, 2009 No comments:

Speldrong The Merciless
I am an artist and writer based in the Scottish Borders. I use my blogs as archives of thought or depositories of ideas.